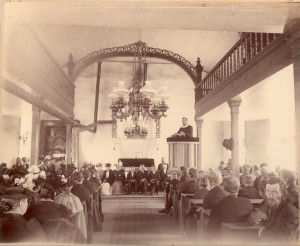 Two historic Norwegian immigrant churches sit on a hill in the farm valley south of Northfield, Minnesota near Big Woods State Park in a panorama of prairie and oak savanna.

The Valley Grove Preservation Society members are stewards for the two Valley Grove churches, the 1862 stone church and the white clapboard church built in 1894 and also for the surrounding 50 acres of rolling prairie grasses and trees.

In 2000, in an eleventh hour appeal to friends, the Society raised the funds to acquire and preserve the land surrounding the churches from development and restore it to an oak savanna. In the past few years, the 1894 church has also received a new steeple roof, finials, extensive exterior repairs, re-painted exterior and also a well for water.

Since 2007 restoration of the 1862 stone church has commenced and will continue in a stepwise fashion as funds become available.

Valley Grove is on the National Register of Historic Sites. Under the oak tree in the southwest corner of the churchyard, Pastor Bernt Julius Muus from Norway baptized 52 children in 1859; he went on to help found St. Olaf College. Many of the memorial stones are in Norwegian , and the graveyard contains the family plot of the innovative Veblen family, whose son was economist Thorstein Veblen.

Today, Valley Grove is the site of weddings as well as its annual country social and concerts including its well-loved Christmas Eve concert/celebration.

In June 1973, three dozen local residents who loved Valley Grove incorporated as a non-profit organization, The Society for the Preservation of Valley Grove Church, to protect the gracious old landmark. Chairman of the informal meeting was John Maakestad, a Valley Grove neighbor and St. Olaf art professor.

The Preservation group voted unanimously in favor of the suggestion by local attorney Robert Majerus to form the non-profit association. Majerus reported that about 100 local residents had pledged more than $1,000 to maintain the church.

The name of the group was changed in 2001 to Valley Grove Preservation Society.