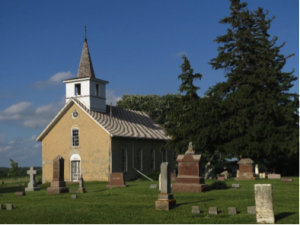 With good reason, Valley Grove is on the National Register of Historic Sites. The 1862 limestone church was built in a significant era of Minnesota’s history, in the year of the Dakota Uprising nearby and in midst of the nation’s Civil War, in which the Minnesota volunteer regiment played an essential role. Yet at this peaceful and beautiful site, one senses what it must have meant for Norwegian immigrant farm families scattered around the countryside to have a physical center for fostering their traditions and values, a haven in those times that was grander than their simple homes. The churchyard, with its commanding view of the surrounding area, became the final resting place for the congregation’s members; the first gravestone dates from the year of the stone church’s construction. 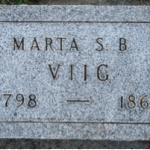 One of the first gravestones

Already the location the settlers chose offers pastoral views in almost every direction, with the two historic churches standing sentry over a rolling landscape of fields, forest, and prairie. Today, the picturesque setting in the immaculately kept grounds, surrounded by the restored oak savannah, must give the site an appearance similar to that of the founders’ time, enhancing the simplicity of each church in its own way. This unusual incidence of two churches in one ensemble also provides insight into Minnesota church architectural history.

Constructed with local limestone rock by Norwegian immigrants and dedicated in 1868, the building was plastered to protect the stones from weathering. Then lines created with darker whitewash were applied to give the illusion of well-crafted symmetric stones. Historic photos also show two bas-relief sculptures on the front of the church. Recently, we’ve discovered that the style of plaster work is quite rare and requires extensive work to be restored for future generations. Grant applications for funding this and other restoration projects are in progress.

The interior of the stone church originally featured a raised pulpit on the right side of the sanctuary, a small organ, an elaborate cast-iron chandelier with matching wall sconces, and a hand-carved wooden arch that linked the two ends of the three-sided choir loft. The bell, cast in New York, installed in 1875, and moved to the clapboard church in 1894, is said to be the second oldest church bell still ringing west of the Mississippi. An iconic rooster finial graces the steeple. 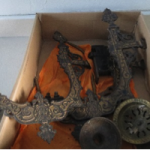 After 1894, the stone church was used as a Guild Hall, where the Ladies Aid met and community functions were held. In 1895 a false ceiling blocking off the choir loft was built, along with a kitchen at the east end. In recent years, the false ceiling was removed as part of a restoration project. Other efforts have included restoration of the steeple, with the reconstruction of the rooster finial from a rediscovered sketch (2008), and installation of new maple flooring 2013). The recent rediscovery of parts of the original chandelier raise hopes it might also be restored or recreated. 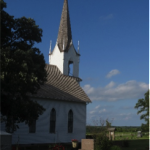 This structure was built when the congregation outgrew the stone church; it was dedicated on November 8, 1894. Its Gothic style has direct connections to other historic churches in the area, such as the Christiana Lutheran Church in Lakeville (1878) and Grace Lutheran Church in Nerstrand (1894). Arched windows, the colorful organ, well-crafted wooden pews, and the painting in the alcove above the alter grace its plain interior. The belfry is reached from the balcony at the rear of the sanctuary. The pulpit, the original organ, chandelier (later removed), and bell were moved there from the stone church. Over the years improvements to the church have included a new and finer organ (1911), electrification (1939), and a modern sound system (2010), as well as a series of ever-better heating systems (the latest in 2013). 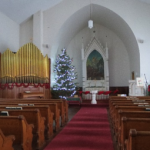 For a chronology of construction and reconstruction efforts, see the Historic Structures Report (2013) [PDF]